In my introduction to this series, I suggested:

It’s hard to learn things, and it’s even harder to remember them after you learn them if you’re not using them constantly.

While this is certainly true, there are still a lot of ways we can make the task of long-term learning easier. As with any other tool, human memory is very good at some things and very bad at other things. Knowing the differences can help us not only to decide what we should attempt to learn and memorize (because in a digital age it’s rarely worth learning information that won’t give us any benefit over a computer) but also to choose to learn that important information in ways that play to our strengths rather than our weaknesses.

Rather than trying to present a rigorous scientific background, this article will instead invite you to recall examples from your own life or try to memorize specific pieces of information to help you quickly see these differences. If you want more scientific information, there’s a lot of research on most of these topics, which you can find pretty easily starting from Wikipedia or any good resource on educational psychology.

We’ll begin this week with things human memory is good at.

Take a moment to think of a few things that are white. Pick one of these items that you can hold or touch, and imagine for a moment what it feels like in your hands. Now think of something that’s a similar shape and texture to that item but has a completely different purpose and context. Now describe what the purpose of that item is and find a word that rhymes with that purpose. Finally, make up a sentence that uses that word in a different context.

Let’s take a moment to reflect on what we just did. Chances are you had no difficulty at all working through any of these steps, even if it took you a few moments. You likely have never been asked to do any of these tasks specifically before, so you can’t have done anything specific to prepare for them, yet the tasks were easy because the necessary concepts are associated with each other in your memory in a wide variety of ways. Further, you were easily able to move from one task to the next. In comparison, computers can be ruthlessly efficient at particular tasks they’ve been optimized for, but perform remarkably poorly at working with information organically like in this exercise.

People store and later retrieve information by associating it with something they already know. This is a vitally important fact when deciding how to memorize something; we’ll get to that later.

Look around the room you’re in for a moment. Chances are you recognize a wide variety of objects: a floor, walls, a ceiling, chairs, desks, a computer or smartphone, and so on and so forth. When you walk into a building you’ve never been inside before, do you ever have trouble determining where the boundary between the floor and the wall is, or whether something is a chair or not? That sounds like a pretty stupid question, but if you stop to think about it, these are remarkably complex tasks. Take a look at a few chairs: 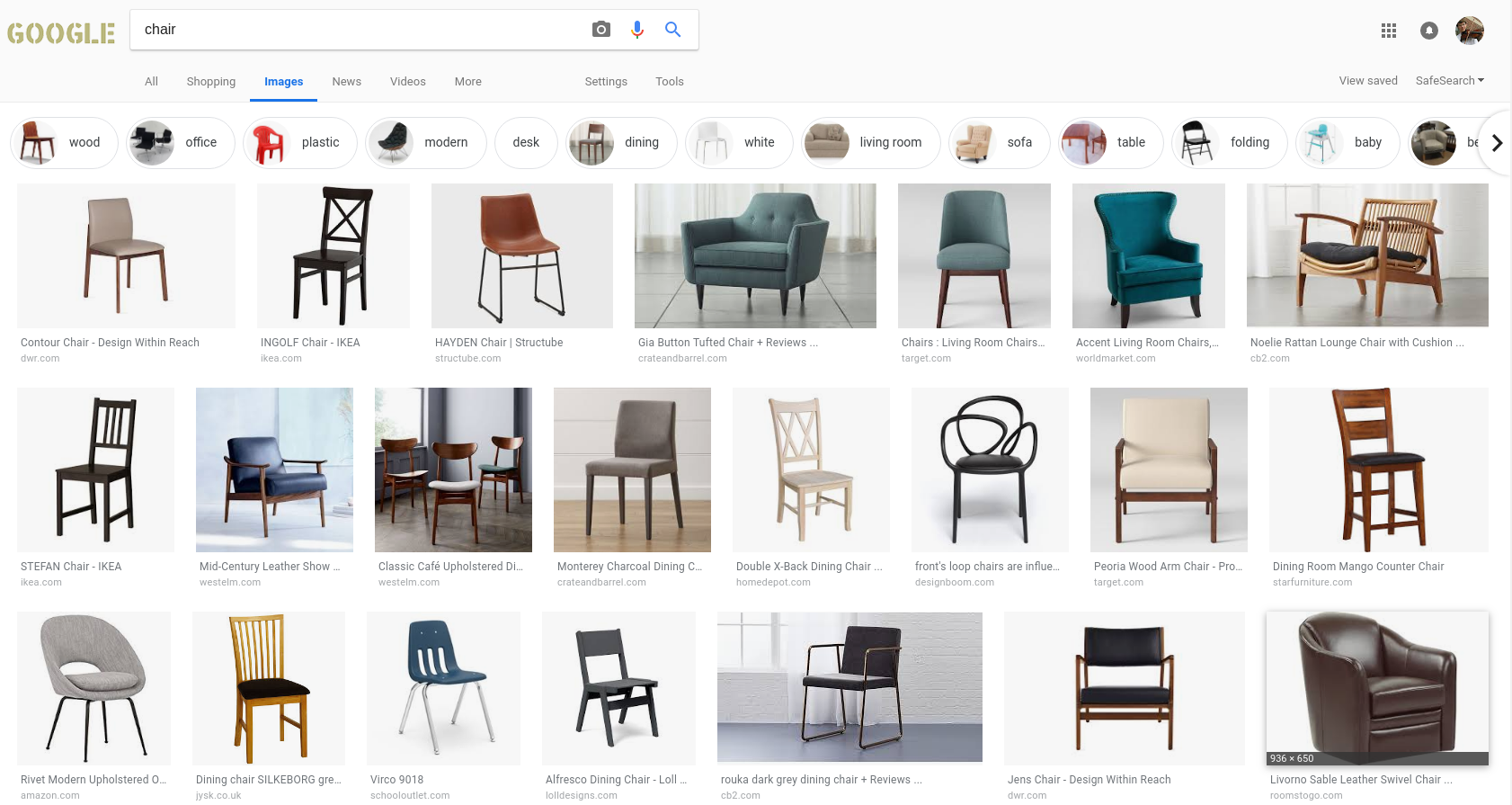 Sure, they have some common features, like a flat horizontal part, but there are a vast array of designs which don’t have a whole lot in common besides their intended purpose. Meanwhile, short filing cabinets, cardboard boxes, love seats, and nightstands also have a flat horizontal part at a similar height, but we’re at no risk of mistakenly thinking those are chairs. We are somehow able to hold in our memory a conception of “chairness” that allows us to nearly 100% of the time identify a chair on sight without even having to think about it. Computers are still absolutely terrible at this by human standards:

While great strides in computer image recognition and similar tasks have been made recently, this is currently one of the biggest advantages people have over computers. Recognizing patterns is also a crucial component of creativity, which even more than image recognition remains a human specialty. Indeed, that’s one of the primary reasons you want to memorize things: the more information you have to work with, the more connections you can make and the easier it is to understand a new concept or even make a useful one up yourself.

Think of a place you’ve been only once, at least a few years ago. Can you describe what the place was like? Would you be able to identify where the place was if you were shown a picture of it?

Now think of a paragraph you’ve read only once, from about the same time. Can you even identify one at all? Forget trying to remember the words in it in detail!

Perhaps because images and particularly places are complex multi-sensory experiences, and perhaps partly due to evolutionary pressure caused by our need to find our way around the world, we tend to remember them especially well.

It’s possible to take advantage of this bias by converting other types of information that are otherwise difficult to remember into imagined images, perhaps located in imagined places. For example, I remember that my apartment storage locker uses the Hillman-brand key and not the Walmart-brand key on my keyring (they otherwise look identical) by imagining a hill man lives in the locker. We’ll look at this idea in detail in a future post in this series.

Which of the following facts is easier to remember?

The second fact is one of my favorite pieces of sports trivia of all time. The image of some guy in a regional soccer game not only tying a game by scoring two own goals but also scoring the only points for his team is hilarious and unforgettable. In contrast, the first fact is only memorable if you care a lot about soccer or one of those countries.

In general, facts, images, events, and other pieces of information are much easier to remember when they are appealing in some way; for instance, they might be humorous, bizarre, disgusting, physically impossible, sexual, or emotionally powerful.

If the things you want to remember are boring, you can try embellishing them with more interesting images or ideas. We’ll return to this idea as part of other posts in this series.

As discussed above, next week we’ll be continuing with the other side of the coin, weaknesses of human memory. See you then!

Over the years, I’ve encountered quite a lot of tech problems, as someone who knows a lot about computers, writes software for a living, and has ...