Anki’s default scheduling settings are good enough in most cases. But sometimes they don’t work optimally with certain types of material or study patterns. Fortunately, the parameters of Anki’s scheduling algorithm are highly customizable; unfortunately, you have to figure out how to change them appropriately by making educated guesses.

This article will not provide suggestions on specific settings I think you should be using, unlike other articles you may find floating around the web. That’s because I find it unlikely that other people’s customizations will work all that well for you, and if you use someone else’s settings as-is and don’t fully understand what they do, you may make your performance worse instead of better. Instead, I hope to help you understand a process you can use to experiment with changes as needed.

Before you start trying to tweak scheduling options, you should have at least a couple of months’ experience with Anki. That’s for several reasons. First, to make informed changes to scheduling options, you usually need some statistics to work from. Second, you’ll have an easier time understanding what the settings do once you know your way around Anki. And lastly, you can almost always do without changing the scheduling settings at all; it’s a way to squeeze a few more percent of efficiency out of your learning. You will get way more efficiency gain out of, first, using Anki at all, and second, figuring out what kinds of things you want to learn and how to turn them into good cards. That’s usually quite enough to focus on for a few months.

Once you get that far, I still suggest you never change a setting until you:

Let’s look at how I might decide to change some scheduling options. Recently I’ve noticed I have a problem in my Technology deck: my retention percentage is too high. That is, I’m not forgetting cards often enough: 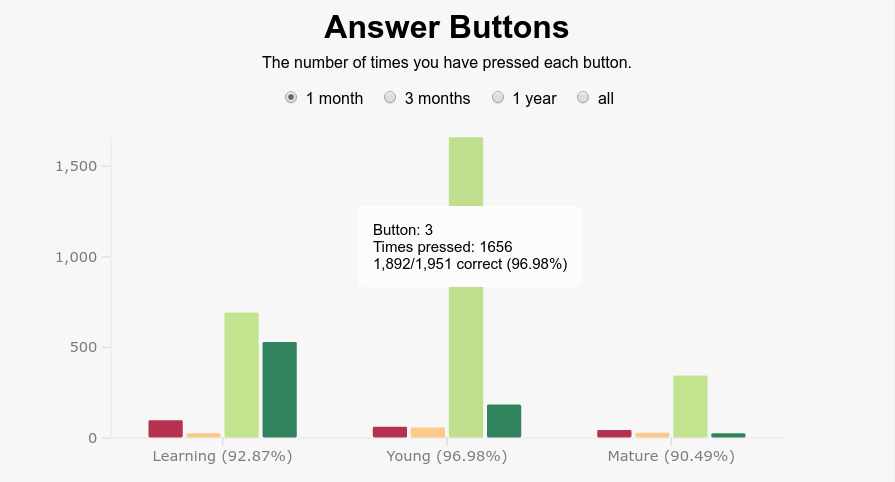 This is what one colloquially calls a “good problem to have,” to be sure, but it’s still a problem: a retention rate of 97% means that I’m reviewing cards much more frequently than necessary. By accepting a somewhat lower retention percentage, I can learn more material in the same amount of time, which would be lovely because recently I’ve often been adding 20 or more new cards a day in this deck, which has been filling up my study time and limiting my ability to learn any other new information with Anki. Anki’s default parameters are intended to yield a roughly 90% retention rate, but in my case with these cards it’s not getting there. (Study time is actually used most efficiently at a retention rate of about 85%, but studying tends to be less frustrating and not much less efficient when you forget somewhat fewer cards.)

Why is my retention rate so high? Anki doesn’t have any way to tell me this, but I suspect several factors:

Whatever the reason, I want to get that percentage a bit lower. Specifically, I want to decrease the young retention percentage; young cards are those that have an interval of less than 21 days. The mature percentage is just about bang on target already. That means I want to find scheduling options that will space my cards out further right after they’re introduced, while not making the “easiness” persist in the long term.

We have a few options for making cards “easier” so they appear less often:

It looks like the learning settings are the winner, for my first experiment at least. Here’s what I ended up doing:

Now I’ll wait a month or so and check my statistics to see how things are going: maybe I can increase the intervals even further, or maybe I overshot. It’s important to wait at least a couple of weeks before checking, no matter how impatient you’re feeling. New users often get upset if their retention over a day or a couple of days is off, but any number of factors can influence your retention in the short term, including how focused you were when you reviewed, whether you happened to get a harder or easier set of cards over that time period, and even just plain random chance (which things you happen to forget is more or less random). Focusing on those small variations can lead you to false conclusions. Over longer periods, you’ll be able to get a much more accurate reading on the effects of your changes.

Learning what settings to change

If you think you have a problem you can solve by changing your scheduling options, spend some time perusing the possibilities available in the options screen and the manual and see whether each could conceivably help you, like I did above. Then pick one, give it a try, and see what happens!

One word of warning: if your problem is that your retention percentage is consistently too low, you should first try to boost it by ensuring that your cards are precise, incorporate mnemonics when helpful, and follow as many of SuperMemo’s Twenty Rules as possible. If you simply change the settings to make cards show up more often, that might work, but you’ll be hiding the real source of the problem and making things harder than they need to be. (I say it might work because you might also get frustrated and quit using Anki!)